When you first join UnScared it can be a little overwhelming. Not only do the CrossFit classes seem to contain more movements than you can possibly keep track of, but there are also other classes “on the other side of the wall” that focus on other things that apparently are useful and important, but what they are and do exactly may remain a mystery. Even more experienced athletes sometimes get lost when trying to figure out which class to take, and how often. So let’s take a look at each class and then discuss some examples of how to mix and match.

This is the class most people come to UnScared for, and most people are familiar with. You build your conditioning, strength and physique with functional movements. The hour is filled with a high-intensity CrossFit workout, but also incorporates plenty of technique work and accessory movements for a great all-round experience. CF60 classes are an excellent choice if you want to work on improving your fitness in general. Because it’s so varied and incorporates many types of movements you won’t get bored quickly and you’ll slowly build a wide and solid base of strength, technique and conditioning. If the feeling of your heart rate spiking fills you with dread, CrossFit might not be the class for you (yet). However, if you’re an adrenaline junkie you might just have found your new addiction.

The name gives it away really, the main focus of strength class is to make you stronger. This means the classic powerlifting movements (squat, bench and deadlift) frequently make an appearance. But there’s also a big focus on (compound) accessory work to improve loadability and prevent injuries. This means this class is great for a wide range of people, from those just starting out and wanting to build a solid base, to those recovering from injuries and experienced strength athletes aiming to get even stronger. STRENGTH60 classes are lower paced than CF60, with the coach explaining an exercise, the sets and reps, then setting a timer in which you will get the work done. This means there’s time to rest between sets where you can get feedback from the coach or connect with your fellow athletes. Strength classes also allow for a great deal of flexibility, meaning there is a lot of room for the coach to tailor the class to specific injuries or needs.

Everything you do in an olympic lifting class focuses on improving the 2 olympic lifts; the snatch and the clean & jerk. Now before you scream “boring!”, this doesn’t mean this is the only thing you do in class. The 75-minute class incorporates many different exercises such as pulls, squats, and technique drills to improve your overall strength and proficiency in the clean & jerk and snatch. Because the olympic lifts are such technical movements, much of the time is spent learning and perfecting the movements. However, weightlifting is still a strength sport, so you definitely will get stronger. The OLY75 class is ideal for anyone who wants to improve their snatch and clean & jerk, this means everyone from complete beginners to experienced lifters will benefit from this class. The tempo is similar to that of a STRENGTH60 class with plenty of room to adapt the training to different levels and technical needs.

Now that you know what to expect from each class, here are some guidelines to help you choose which classes to attend.

Example 1:
Madelon has been doing CrossFit 3 times a week for 2 months now. She already has a solid strength and cardio base from previous sports, but struggles with the more technical aspect of the olympic lifts. She decides to join 2 OLY75 classes weekly to help her learn and get comfortable with the snatch and clean & jerk, while still joining 1 CrossFit class to maintain her strength and conditioning.

Example 2:
Jeremy just joined UnScared after years of being mainly sedentary. He has no real experience with sports and finds CrossFit very hard and overwhelming. He would likely feel much more comfortable starting off with strength classes 2 times a week. That way he can get used to training at a slower pace, with plenty of room to adjust the movements to his level. If he enjoys more technical work he could then transition into olympic lifting, or later join CrossFit classes if he’d like.

Example 3:
Edward has been training at UnScared for 3 years now and has noticed that while he excels at cardio workouts, he sometimes lacks the strength to do workouts RX’d. He trains 4 times a week. There’s a good chance that if he mainly notices the lack of strength in olympic type lifts (think, snatch and clean & jerk, but also push press, overhead squat, front squat etc) it may be a combination of lack of strength and lack of technique. In that case he’d be best off joining 2 CrossFit classes every week + 2 olympic lifting classes to improve his skill and build strength in those movement patterns. However, if general strength is the problem (i.e. deadlifts, pull-ups, squats, sandbags) strength class twice a week would be the way to go. Note that improving general strength will definitely benefit your olympic lifts, but only if you are technically proficient.

Example 4:
Kevin has a lot of experience with strength training, but now mainly trains for health, fun and to look good on the beach. He’s currently recovering from a hip injury, so attends 2 strength classes a week to improve his general loadability and do all the bicep curls. Besides that he joins 2 CrossFit classes to improve his cardio, and make his workouts as efficient as possible. 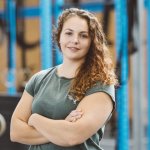 Cecily is a CrossFit, Strength and Olympic weightlifting coach at UnScared. She devoted most of her young life to competitive swimming and gymnastics, only to discover UnScared and fall in love with CrossFit and Olympic Weightlifting. She now spends her days studying computer science, doing snatches and baking protein-filled goods. Don’t let her love of fluffy animals and British accent deceive you however, her puns are still unBEARable.