Running is one of the most common endurance modalities used in CrossFit. When programmed in a WOD running distance is mostly short, usually around 400 meters, combined with other movements and performed under fatigue for several rounds. The main difference between running and other CrossFit movements is the amount of repetitions. If we consider every step as a repetition, running just 400 meters can easily meaning doing more than 300 repetitions of the same movement of constantly braking and accelerating.

Four to thirteen percent of all CrossFit related injuries occur during the endurance aspects within CrossFit training [1-6].

Coaching a running athlete during a CrossFit workout can be quite a challenge. Often the athletes will be running outside of the gym, making it hard for a coach to keep eye contact, or any contact at all. When a coach does see their athlete and they succeed in providing verbal cues - while running along for example - he or she will likely forget these cues and corrections within 30 seconds. So how do we deal with coaching running not just for one athelte, but for a packed class of athletes who would probably all benefit from a better running technique.

In this article, we will discuss biomechanics in running, the most common injuries and how to best deal with the coaching aspects of running during CrossFit workouts.

At the end of the swing phase, just before the foot touches the ground, a phenomenon called "pre-activation" takes place: the muscles of the lower leg contract to absorb the forces of the foot touching the ground.

This pre-activation leads to more reactivity of the calf muscles, thus increasing speed. During stance phase, a lot of energy can be lost in having to start up the movement every single step over and over again.

No specific research has been done regarding the type of running injuries during CrossFit workouts; however, in general running populations, the following injuries have the highest incidence [7]:

In our experience, we also see many knee overuse injuries from running, such as patellar tendinopathy and iliotibial stress syndrome (also know as "Runner’s Knee").

During running, we like to see an open posture: chest forward, head up and no torsion in the upper body. In the pushing leg, we look for the triple extension at the ankle, knee and hip joint, in the same way as in pulling phase during weightlifting, for instance. In the pulling leg, we look for triple flexion of the same joints.

Running under fatigue will likely express the technical flaws of an athlete. Examples of these are often:

The excessive sideways motion of the pelvis often coupled with a dropping hip on the landing leg (Trendelenburg sign). Weak glutes are the culprit here. This can lead to hip, knee and low back injuries if not addressed properly.

A very long stance phase makes for poor running economy. The elastic energy leaks away into the ground instead of pushing you forward, effectively causing you to restart the running motion during every step.

Style and technique are interrelated during running. Everyone has their own running style. But how can you tell whether it is a technique flaw or just an athlete’s individual style?

Focus on running posture instead of foot placement

Heel strike or forefoot landing? We say focus on posture first. Tell your athlete to keep an upright posture and foot strike will change in our experience.

Coach running technique during warm up and skill work

Unless an athlete is becoming a danger to himself or herself during the WOD, let them carry on. Do not be tempted to try and coach their technique. As stated before, under fatigue they will probably forget your advice quite fast or a coach will simply confuse the athlete. Instead, focus on technique and muscle activation drills during warmup. When starting the WOD, shout some quick pointers at the group while they run off:

‘Be a gazelle, not an elephant!’ (to make for shorter ground reaction times)

These exercises will help your athletes become more proficient at running. Depending on your indivudual running style deficiency (Cyclist, Elephant, Gazelle), you can choose to put your focus more on one over the other exercises.

Exercise 1. Push the wall, or a ball, or your buddy

Stand against the wall at a 90 degree angle. Lift the leg nearest to the wall to 90 degrees and gently push your knee into the wall. Catwalk Model? This exercise will teach you to activate your glutes and keep your pelvis level. Perform 3 sets of 20 seconds per side.

Variation: use a Medicine Ball for an added challenge or mix it up and push against the knee of your buddy from a lunging position.

Place hands against wall. Feet at approximately one meter distance from the wall. One leg in triple extension, the other in triple flexion. Change leg position as fast as possible without jumping. Are you an Elephant? Feel your inner Gazelle coming out with this exercise. Perform three sets of 30 seconds.

As a variation, you can choose to do a couple of small steps before changing left and right or have your buddy tell you when to stop by clapping his or her hands.

Putting it all together

To be able to run efficiently and with the least chance of developing an injury, these exercises may be helpful. Give them a go before a WOD and let us know how you like them. Want to learn more about Fysiofabriek’s no-nonsense approach to treating sports injuries? Head over to their website. 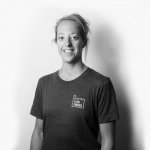 Channah is a physiotherapist for our partners at Fysiofabriek. She has a background in several competitive sports like climbing, triathlon and CrossFit and is a last-year master student in Sports Physiotherapy. Next to her job as a physiotherapist she is designing a scientific research to injuries related to CrossFit training.