"Constantly varied, functional movements, executed at high intensity," is the long-standing creed of CrossFit. The key to the success in CrossFit is intensity. When the intensity is too high or is applied in the wrong way, it often and unfortunately also means injury. In this article, I attempt to provide a solution for the issue of intensity in CrossFit and use an important concept from the StrongFit training philosophy to help provide a guideline for every coach, which they can use to apply 100% intensity safely even to the most inexperienced athletes, without worrying about the risk of injury.

A short workout with Pull Ups and 60 kg Squat Snatches is programmed. Two good friends - Bart (42) and Thomas (41) - are joining their first CrossFit class after they’ve had a trial lesson the week before. The coach plans on running a balanced workout that should be fast-paced and intense! He decides to push both men hard in terms of intensity during the workout, but he will also “wisely” switch to Banded pull-ups and Squat Snatches with an empty bar. The entire following week Bart has a lot of pain in his shoulder while Thomas has such a bad case of muscle soreness, that he can hardly perform his job as a dentist properly. Both Bart and Thomas doubt whether they should continue doing CrossFit and Bart even contemplatively states that he "might be too old to do intense strength training".

Unfortunately this concerning but fictional story is not a rare case. As a beginner CrossFit coach I already struggled with the concept of "intensity": When do I allow someone to go completely all out, while also making sure this does not discourage or harm the athlete, especially when it comes to new members? In 2016, when UnScared brought Julien Pineau to Europe for the first time to do a seminar, and when I then took part in the first StrongFit Coaches Week which included Niels Verschuren and Nolan Mooney, I got the answer in the form of the abbreviation "W.E.S."

There are three factors that determine how safe 100% intensity - going all out in your workout until you really cannot go any further - really is. These three factors are ‘Weight bearing’ (is there a lot of weight axially supported by your body or joints in the workout exercises?), ‘Eccentric phase’ (is there is a significant eccentric phase in this exercise?) and ‘Skill’ (is there a lot of technical skill required for this movement?). Going back to the fictional example of the workout with Strict Pull-Ups and Squat Snatches we mentioned earlier, we can immediately see why it would be foolish and dangerous to go for an "all out intensity" workout and to push non-competitive athletes to the limit.

The ‘weight bearing’ component of this workout is quite high. The bottom of the Snatch is a rather uncomfortable position, where a relatively large amount of weight is supported by the shoulder joint and other more prone-to-injury joints. During the Pull Ups in the same workout, these same shoulder joints are carrying almost the entire body weight of the athlete as well. In addition, the scaled version the fictional coach came up with (Banded Pull Ups) has a significant eccentric phase when the athlete controls himself down to a hanging position.

So why is it a problem to program - or scale people towards - movements with a big eccentric phase? This is twofold, especially for beginners. First of all, the risk of Rhabdomyolysis or muscle rupture is a lot bigger. Besides that, it is theorized that muscle soreness is particularly caused by the eccentric phase of a movement. The Snatches also score high when it comes to the ‘Skill’-component, as snatches are perhaps one of the most technical movements in CrossFit. When an athlete gets tired, especially a beginner, he or she will first break down technique-wise, before muscle failure will occur or before the athlete gives up mentally, increasing the risk of injury even further.

With the analysis of the fictional workout described above, I don’t mean to say that the workout itself is necessarily bad. If it is adapted and scaled well, it can be an excellent workout even for beginners. However you need to be a high level to really go all out and to go for 100% intensity during this workout. A good coach should see this not push the majority of his or her athletes to the limit during a workout with so much weight bearing, such a large volume of eccentric movement and such a high skill demand. The lower a workout scores in terms of "WES", the more intensity can be applied safely.

This leads to the next question: when can we apply 100% intensity with beginners? What is safe for the “average Joes” doing CrossFit? Or, if we rephrase: which exercises score low on the “WES”-scale? Many classic StrongFit-style exercises (Sled Drags, Rope Pulls, etc.) are a good example, but perhaps the Assault Bike appeals a little more to the imagination of many CrossFitters. There is literally no skill involved, the joints are not axially loaded and there is barely an eccentric phase.

If you push a beginner on the Assault Bike, he or she will give up because the athlete really doesn’t want to continue or because he or she is not able to continue. Is there a risk in developing or reinforcing bad technique? No. Is there an injury risk in all out assault biking? No, except if you count vomiting, nausea, and losing the will to live as an injury. Exactly the same applies to a Sled Sprint: pushing a loaded prowler over a certain distance. The "WES" is extremely low: there is no technical skill needed, just keep your head down and walk. If the athlete gives up, the sled stops and no barbell falls onto the athlete. It's only a concentric muscle contraction. The latter is interesting: have a new athlete do a few all out sled sprints, ask him how his legs and glutes feel and ask the athlete if he expects to be sore the next day. The answer to the last question is often "yes", but when asking the next day whether they are actually sore, the answer is often a slightly surprised "no".

To get a better idea of safe movements and exercises on the "WES" scale it is worthwhile looking at the differences between Sled Rope Pulls (see the blog post image) and Rope Climbs (rope climbing). Despite the movement patterns showing similarities as both are an asymmetric pulling movement of a rope, the safety of the movement is completely different, especially for beginners. With Rope Sled Pulls a coach can push an athlete to the limit with 100% intensity, but without any reasonable risk. If the athlete really cannot push any further (or, more likely: no longer wants to push further), the sled comes to a standstill and that's it. If an athlete, whilst doing a Rope Climb, suddenly is not able or willing to continue, he may have a big problem: giving up at the top of a Rope Climb is quite a risky situation. In addition, you are more likely to be sore from Rope Climbs, even with scaled versions such as a Floor Climb. For the same reasons as with Sled Sprints, this will not happen with Rope Pulls. Besides that, the weight of the Rope Pull sled is easy to scale, while the weight of a Rope Climb is rather difficult to adjust because it’s all about the weight of the athlete.

NO MORE MUSCLE-UPS AND SNATCHES EVER AGAIN?

After this rant about intensity and complex exercises, there might be two questions left to answer. If applying all out intensity and going to the limit is so risky for athletes, should coaches even apply it to beginners? And if exercises that are heavy weight bearing and have both a significant eccentric phase and a high skill level bring risk, should coaches still program them for beginners? Yes and Yes.

Let’s start with the latter: beginners should also learn complex techniques to improve their motor skills and coordination and to get to know the extremely satisfying feeling of learning complex new technical skills. And yes, even beginners should do exercises with a big eccentric phase to build strength and muscle mass. Beginners and non-competitive athletes should not do this whilst fatigued or they should simply not seek 100% intensity in these movements. You should look at the "WES" scale exactly as it is: a scale. The more advanced an athlete is, the more complex and weight bearing movements an athlete can do with heavy intensity. From Assault Bikes, to Push Ups, to Power Cleans and ultimately to Squat Snatches and Muscle Ups. Unfortunately the “pushing someone far enough and they will break-principle” exists with all these movements (see: seriously injured Games-athletes, mostly due to overuse). On the standard StrongFit and "super low WES" movements, a coach can push an athlete as much as they want: they won't break. At least, not physically.

THE RESPONSIBILITY OF A COACH

The only question that still remains unanswered is: should we look for 100% intensity and go all out in the first place? And if so, why? As far as I am concerned, absolutely. And not just because it is an essential part of CrossFit as mentioned in the introduction of this article. Intensity is a driving force, or perhaps it is the driving force, to make progress in strength and conditioning. In addition, looking for 100% intensity develops an important skill: mental toughness. In a time where we are all too accustomed to comfort, safety and convenience, going all out is something that everyone should experience in every once in a while. I personally believe it is something that simply builds a stronger personality in general. Creating  “artificial adversity” is necessary to become a stronger and more resilient person; nothing creates artificial adversity as well as a 200 meter Sled Sprint.

It is the role and responsibility of a coach to ensure that intensity is applied wisely and prudently in order to optimise the workout experience and safety of the athlete. This role and responsibility of a coach must absolutely not be underestimated. A new athlete who, after months of doubts finally dares to take the step to start training, can easily be put off  by unnecessarily high amounts of muscle soreness, by injuries, or by the feeling of not being able to do anything. It is the coaches’ job to keep new athletes from getting injured and to give them a feeling of winning. Every athlete wins with a low "WES" workout. If a coach scares a new athlete during their first heavy training, he or she runs the risk that the athletes’ experience creates a negative picture about training, a gym or physical activity for the rest of their lives. A coach has the power to make people very happy or very scared about movement and thus he or she has a lot of influence on the physical condition - and the quality of life! - of the people they train and guide. And with great power, comes great responsibility. 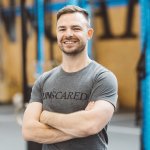 Willem is a coach at UnScared CrossFit and one of the co-owners. A former personal trainer, powerlifter and Philosophy graduate he is now responsible for the day-to-day operations at UnScared as well as marketing and social media.